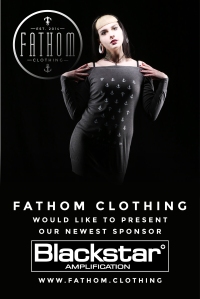 So Thank You Blackstar Amplifications, We really appreciate it. And I actually say that with 100% genuine words. Anybody that comes to us and asks to work with us, goes through a long process of actual talking and consideration. Blackstar has a huge following and is the 2nd largest amplification manufacturer in the USA. Even though they are from the UK. And almost all of their customers probably have tattoos and a desire to be heard. But that’s not the reason I’m excited about this sponsorship. The four founders slash band members, whom worked in the amplification field of music to begin with decided to develop an amplifier that would match the toning and sound they wanted to create. And they began experimenting in their shed and by the summer had an amplifier model that they debuted at the 2007 Frankfurt Musik Messe. This is the embodiment of the goals and motivations Fathom is trying to inspire. We want anyone with a passion for creating to just create and these four talented young musicians did what most people just end up talking about and never get done. Start a company and create something from nothing.

But anyway, all though I don’t quite understand what it is that we need to do with these amps, all I do know is that we need to use them to help anyone that needs help. We were thinking of having photo shoots with the amps in the photos and also have them at the shows being used, SO that means we need some models or anyone that wants to get their portfolio going, and you can go to the website and fill out a modeling form at Fathom.Clothing. And you can see the amps at the March 7th Show, at Long Island Glass where we will probably be testing these things out and also getting some content with them in it. And if you have any ideas about how to help promote some amplifiers please let us know, I’m sure we would be interested in renting them out if anyone would like to borrow them for the weekend or something as well.